Since at least 10th century to the south of the present Main Square, a settlement established on the edge of the Dunajec River’s terrace had existed. The settlement was surrounded by double wooden and earth embankments and an external moat. Within the borders of the settlement, the later (11 th century) castellan’s seat was located, in the place of an oval hill traditionally referred to as “Wajdowiczówka”. The embankments of the Wojnicz settlement are unique fortification monuments in the scale of Małopolskie Voivodeship. It can be seen best from the Jagiellońska Street. Apart from the settlement’s embankments, the embankments stretching out e.g. along the Zawale Street have been preserved in Wojnicz. 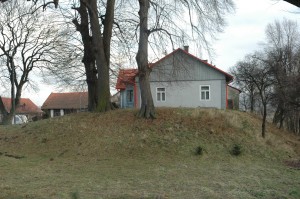 It is located in the very heart of the town and it has undergone only minor alterations since it was built. The Main Square is surrounded by one – and multistory tenements from 18th and 19th century. The most precious ones are located at 2, 3, 4 and 11 Rynek Street. They date back to 18th/19th century and they were covered with a gable roof with its ridge parallel to the Main Square’s frontage. The commemorate the great fire of 1831, when almost the whole town was burned out, including the town hall, in 1843 the St. Florian monument was constructed in the middle of the Square. On the pedestal the emblem of the town was placed, presenting St. Lawrence in an oval shield. On the wall of the Findrówka tenement (29 Rynek Street) the plaques of St. Kinga and St. Jadwiga are placed, which commemorate two visits to Wojnicz, important for the town’s history:

-In 1239 Kinga, daughter of the Hungaran king, later wife of Bolesław V the Chaste, arrived to Poland and she was officially welcomed in the Wojnicz settlement. At that time Wojnicz hosted, among others, Prince Bolesław and his mother, Princess Grzymisława. Most probably, the pro future wedding ceremony of the young couple took place then in the local church, and the regent Prince Grzymisława, on behalf of her son Bolesław, granted a number of privileges. It is believed that in those circumstances the decision was made to transform the settlement into a town founded on sredenses rights (lus Novi Fori). Undoubtedly, the town has its origins in the colonization policy of Bolesław V the Chaste and it is thanks to the king that the town was founded in the times not distant from the events of 1239. The town may have been delineated in the area of the former settlement growing nearby the settlement and in the place of the fairs, most probably near the settlement and its outside city walls.

– On 13th November, 1394, as part of the inspection of the king’s estate, Queen Jadwiga arrived to Wojnicz. Most probably, she was accompanied by her personal chaplain, Piotr of Wojnicz, who used the opportunity to visit his hometown. Wojnicz castellan Jaśko of Tęczyn used to be an ardent follower and a faithful servant of Queen Jadwiga.

The plaques were set on 14th June, 1999, on the day of the canonization of the blessed Kinga. Welccoming Kinga, who later become a saint, in Wojnicz, was referred to by the Pope John Paul II in Stary sącz on 16th June, 1999, who said: “The grain of holiness sowed in the heart of Kinga in her family found in Poland fertile soil to grow, when in 1239 she arrived first to Wojnicz, and then to Sandomierz, and where she established good relations with her future husband’s mother, grzymisława, and her daughter Salomea.” 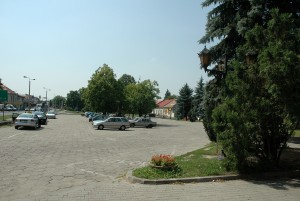 The church is located on the Wooden Architecture Route in the region bordering on the Vistula River of Małopolskie Voivodeship. It is located at Tarnowska Street and it most probably dates back to 16th century (renovated between 1892 and 1893). It is a ooden church with log construction, boarded with planks, possessing one nave a presbytery closed up on three sides, near to which a small sacristy is located. Its gable roof is equipped with a turret with a little bell. In the large church altar a precious triptych dating back to 16th century is located, whose central part presents St. Mary’s Visitation, while on the wings St. Helen and St. Catherine are presented. In the altar’s upper part the painting of St. Leonard is located. In the attic the bell dating back to 1655 can be found, cast in the Herold’s workshop in Bratislava. In 1996, the renovated statue of St. Mary Assumed into Heaven was moved to the church yard. Between 1997 and 1998 historical altars underwent conservation. In 2000 the relics of St. Kinga were transported to the church.

There are several folk tales related to St. Leonard church. The legend has it that the church was brought as it is by the Dunajec River waters from the mountains. According to another legend, only the beam was brought, while other storytellers clim that the waters transported the painting only. 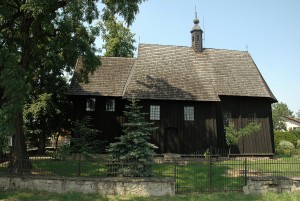 It is a second-class historical site and it dates back to the half of 15th century; most probably, it was constructed by the initiative of the parish priest of wojnicz, Jan of Pniów, who later became archdeacon of Krakow and the rector of the Krakow Academy in place of the former church. After the fire in 1752, the church was thoroughly reconstructed. The church’s presbytery dates back to 15th century. In the large altar one may admire the sculpture of Jesus crucified against a background of Jerusalem – it is a valuable work of rococo woodcarving. On the left side wall the paintings by Tadeusz Konicz from the second half of 18th century are presented. The walls of the central nave and chapels are covered with rococo frescos created in 1767 by Jana Neyderfer. Special attention should be paid to 15th century tin baptismal font and the monstrance dating back to 1613. Initially, the church was a one-nave one, and since 1936 it has been a three-nave church. The presbytery, reconstructed after the damage during World War I, preserved its gothic character. In the second half of 1990s a tower was added to the church, the roof was changed and che conservation works inside the church began. In the wall surrounding the church’s garden a baroque chapel from the second half of 18th century is located – it is built in brick, square, with an arcaded passage, covered with a hipped roof. Right next to the church a wooden bell tower from 16th century is located, with its pillar construction and a tented roof with a suspended top storey, included in the category of second-class historical sites. The bells were confiscated twice-during the World War I by Austrian authorities and then during the Nazi occupation. In 2006 the bell tower was thoroughly renovated. 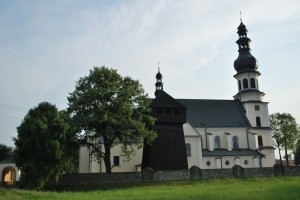 The pieta is one of the earliest works of Polish art from the beginning of 14th century, transported or made on site by a wandering woodcarver. The sculpture is made in wood and 70 cm high. The pieta of Wojnicz belongs to the group of “intimate” presentations of bewailing, refereed to as “Pieta corpusculum”, in which the dead Christ is small, as if he was a child on his mother’s womb. At present the sculpture is located in the Diocesan Museum in Tarnów.

The palace is located near the Technical and Comprehensive School complex. It was constructed in 1876 in the suburbs of Zamość in English neo-gothic style. It is situated in a vast, Romantic park, where special attention should be paid to honeylocust from South America and ponds, over which weeping willows grow. Next to the entrance gate to the park, a Neo-Gothic guardhouse from 1874 is situated. In the palace the emissaries of the Polish Democratic Society used to meet. It was also one on the main institutions preparing the national uprising in 1846. In 2011, the palace was purchased from the district starosty by the self-government of the Wojnicz Commune. 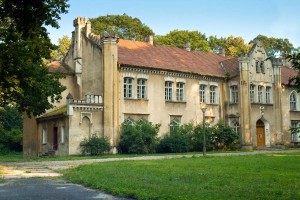 The Chamber occupies the premises in the tenement at 29 Rynek Street (Findrówka), whehe permanent exhibitions of the following collections can be found: a room illustrating the town’s history, a peasant room, interior of the house of the bourgeoisie, exposition room dedicated to the history of bread and craft. Moreover during the year a number of temporary exhibitions are organized by the Association of Friends of the Wojnicz Region (Towarzystwo Przyjaciół Ziemi Wojnickiej) and the Centre of Culture in Wojnicz. The Chamber is open from May till the end of September each Sunday between 10.30 and 12.30. On other dates visits to the Chamber are possible after previous arrangements with the Association. 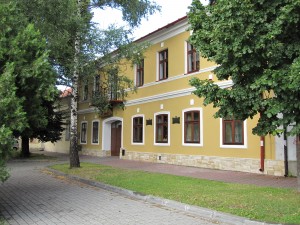 The remains of World War I and II are, among other things, the cemeteries of soldiers, which are preserved in the area of Wojnicz, zakrzów and Olszyny. They are not just treasures of past architecture, but also monuments of the past history. In 1934, the Independence Monument was erected in the Main square in Wojnicz, in order to commemorate the inhabitants of wojnicz killed during World War I. The initiator of the monument’s construction was Wiktor Łowczowski, PhD, a doctor and a community worker. In 1969, a board with the names of the inhabitants of Wojnicz killed during World War II. A number of patriotic events take place in front of the monument. On the wall of the building (located at the corner of Jagilellońska and Rynek Streets) a set plaque is located, commemorating general Gustaw Gryf Łowczowski, a participant of World War I and II who was an inhabitant of wojnicz and the ashes of whom were placed in the Legionnaires’ Cemetery in Łowczówek. In 1991, in Dębina Zakrzowska, the Allied Pilots Monument was unveiled; it is situated in the place where the Allied plane, flying from Italy to provide assistance to insurgents in Warsaw, crashed after it was shot down in August 1944. 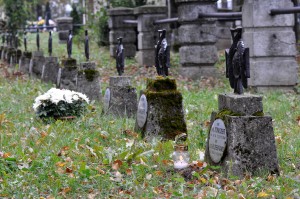 Roadside shrines, crucifixes and statues are an intrinsic element of rural landscape and thus they have become an inherent part of the Wojnicz Commune as well, especially of Milówka and Grabno villages. Some of these shrines, crucifixes and statues are situated in out-of-the-way places, forgotten by people; others are meeting places for local inhabitants. These historical sites from architectural and folk art heritage. They are mementoes of inhabitants and events from the past, as for example the shrines in Biadoliny Radłowskie or Wojnicz. 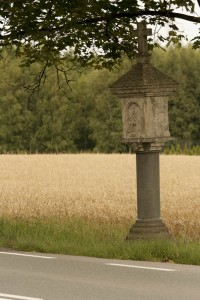 It is a natural reserve in Wielka Wieś, established in order to protect natural positions of orchid and Lady Orchid. In the reserve with the surface area of 63.32 ha 271 plant species have been found, including 21 protected species. Moreover, interesting fungus, insect, reptile and bird species have been observed in the area. Most probably, the name of the mountain (The Maid Mountain) derives from the events related to the fights of unfaithful wives with their husbands who come back from their military expedition to Kiev in 11th century, which the most popular legend of Wojnicz tells about. At the top of the mountain a 14-meter high crucifix was situated in 2000, which commemorates the Jubilee Year, while along the final part of the trail to the mountain peak the Stations of the Cross are located. A blue trail, 7.5 km long, leads from Wojnicz, through Więckowice into the Panieńska Mountain. 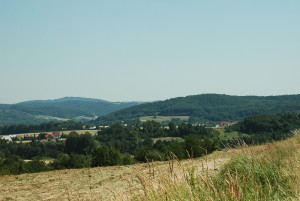